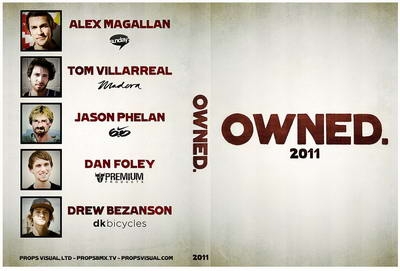 What the heck is Owned?

Owned is a new annual DVD series from Props Visual, the creators of Road Fools, Megatour, and Props Video Magazine.

As often as possible throughout the year we’ll be posting behind the scenes segments of the Owned riders, showing what’s going on along the journey to finishing their DVD part. During the course of the 12 month production period of each Owned, each rider will post a number of these BTS segments – which in totality will show interesting aspects of their parts getting made.

To start out the series, we’re gonna release Owned once a year in December – with the final rider parts we’ve been documenting here. Then the next Owned rider list will be announced and we’ll get to work making a new one.

The Owned section of this site will serve as a home for all the original Owned-related exclusive content and information.

Owned hopes to deliver top notch, cutting edge content while showing the process along the way.

After many months working to arrange the first Owned: 2011 project, we’re excited to announce the debut rider lineup. Check it!

Check out the Owned 2011 pages for bios and info on all these dudes.

Filming has been underway for some of these guys already, so look for the behind the scenes edits to start coming in soon.

A very special thanks to everyone involved in the project, especially the sponsors helping to support the series.